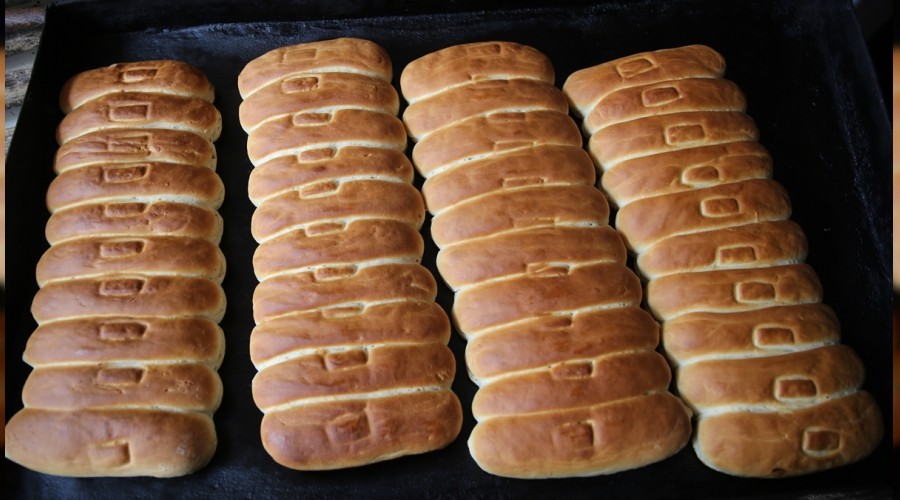 It is a food that is unique only to Nevsehir and is produced in ovens using chickpea yeast. It has an elliptical-rectangular shape, with rounded edges, and it has a protrusion of the same shape in the upper central part; in this aspect, it differs from traditional ring bagels. He is also referred to by such names as "bensimet", "besimet". As it can be eaten plain, it is recommended to be eaten as it is traditionally preferred in the province, that is, together with pot cheese.

Nevsehir Bagels are produced with rounded edges close to a rectangle, unlike the bagel shape produced in other provinces of Turkey. In addition, natural daily chickpea yeast prepared by the masters of Nevsehir province is used to ferment the dough. Sugar and salt are not added. Nevsehir Bagel can keep its freshness without becoming stale for up to seven to ten days.

Production Method: Ingredients: For the dough: Yeast made from wheat flour, water, 100 chickpeas Nevsehir Bagel production consists of the stages of chickpea yeast preparation and bagel preparation. For the preparation of yeast, chickpeas produced on the geographical border are broken down and placed in a narrow bottle with a wide bottom and a mouth. Boiling water is added to it as much as the volume of chickpeas. The mouth of the bottle is closed and left for 8-9 hours at 30 °C to 40 °C above the bagel oven, which is called the “oven dam”. It is clear from the foam that accumulates on it that yeast is formed. This yeast is taken into a container and kneaded with about 200 g of flour, resulting in a dough. The dough is covered and left to ferment at ambient temperature for about two hours on the bagel oven. When the dough is eye-to-eye, it is used as a yeast and kneaded to the consistency of an earlobe by adding 25 kg of flour with 7 liters of water to it. The second dough, which is kneaded, is also covered again and left to ferment for about two hours. This dough with an eye on the eye is used as a yeast for 50 kg of flour; it is kneaded with about 15 liters of water and 50 kg of flour. It is expected to ferment for about an hour and a half. Salt and sugar will spoil the property of chickpea yeast, so salt and sugar are not added to the dough. The kneaded dough is december in the range of 110-120 g and is given a cylinder shape by hand on the marble. Prepared bagels are pressed onto the dough and lined up side by side on the tray. This sequence is usually done in rows of ten. In order to prevent excessive swelling of the bagels, each bagel is shaped with an oval ring on it. Bagel Face Water (Soup): 20 to 30 g of flour, as much water as it takes, and 1 egg or 1 tablespoon of grape molasses are mixed and boiled and cooked like soup. Then it is diluted with the addition of water. This mixture is rubbed onto the bagels. Nevsehir Bagel is baked in an oven heated to 180-2000C and on a wood fire for about 10 minutes. Then the bagels are turned over and baked for another 10 minutes. Bagels, the bottom and top of which are cooked in equal amounts, are removed from the oven and served after resting.

At the stage of Nevsehir Bagel preparation, the dough should be cooked in the cold chain or frozen and sent elsewhere, as this will disrupt the distinctive feature of the product, where the product is produced. Production, Processing and Other Operations that Must Take Place Within the Geographical Boundary: Chickpea yeast and the production method used in the production of Nevsehir Bagel require mastery skills. Nevsehir Ring, which is also distinguished by its unique shape, has a connection with the geographical border. For this reason, it is necessary that all production stages take place within the specified geographical boundary.

We use cookies to improve the use of our site. You are agreeing to the use of cookies.